Find this article at:
go.ncsu.edu/readext?747206
— Written By Rachel Vann

Soybean seed quality issues are widespread across the NC Coastal Plain and parts of the Tidewater region this year in indeterminate varieties planted prior to Mid-May. We do not have a complete understanding of the drivers behind the observed issues this year; however, these are likely a result of an environment by genetic by management interaction in many fields. We have been involved in calls with our County Cooperative Extension agents in many fields across the region over the past month and will discuss some commonalities and differences in damaged fields below.

If growers have experienced severe seed quality declines, there are limited options at this point in the season. Please contact your County Cooperative Extension agent to discuss these options. Many of these seed decay diseases can survive in soybean residues, so growers should rotate out of severely impacted fields next year. We are starting to get questions from growers about avoiding using earlier maturing varieties next year because of these issues. We have always recommended that growers diversify their risk by planting a range of maturities across different planting dates if this is possible from a management perspective in their operations. Most fields where we have seen seed decay in the earlier maturing varieties this year have also had high yield potential. Our 2019 data indicated that seed decay issues could be reduced if planting dates were pushed into May without sacrificing yield; we look forward to providing more data on this in 2020 and upcoming years. 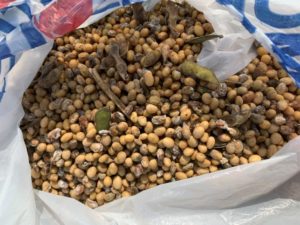 Photo 2. Soybean sprouting in the pods. 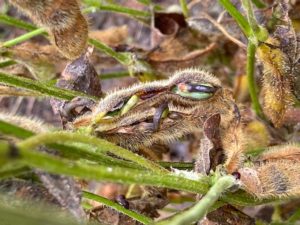