Scout Soybeans for Stink Bugs and Defoliators Through R7

Find this article at:
go.ncsu.edu/readext?731931
— Written By Dominic Reisig 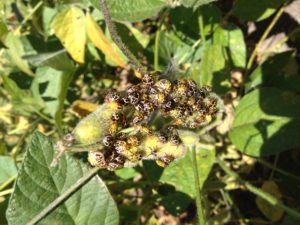 Although stink bugs were light across the state (with a few exceptions) in corn and cotton, it looks like we are having a stink bug year in soybeans. Since we’ve had a few mild winters in a row, southern green stink bug is more prominent and is moving into soybeans. This time of the year, corn is being harvested and cotton is maturing. That leaves soybeans as green islands in the landscape.

Stink bugs are seed feeders and are very destructive to yield at R4 and R5, destroying pods and aborting or shriveling seed. They can still cause yield loss at R6 by sucking away nutrients the plant needs to fill out seed weight and can cause stay-green. Use our thresholds to know when you should treat stink bugs. You can double those thresholds once you hit R6.5 (where the seed is starting to separate away from the pod wall) and don’t treat past R7. Be sure to scout throughout the field, since stink bugs congregate toward field edges. Southern green stink bug is susceptible to many different pyrethroids, so product choice is not as critical as with brown stink bug.

Defoliators like bean leaf beetle and soybean looper seem more prominent this year, as well. Our threshold is 15% defoliation throughout the entire canopy during the reproductive stages. This threshold is very conservative, since soybeans can tolerate much more defoliation without yield loss, especially as they move into R6 and R7. Defoliation isn’t an issue past R7. Nebraska has a great infographic on how to estimate defoliation. The recommended insecticide for soybean looper is Intrepid Edge. If you have bean leaf beetle in high numbers, you’ll need to add a pyrethroid. However, don’t throw this in the tank unless you have to. You can run the risk of flaring things like loopers by unnecessarily knocking out beneficial insects (check out these results from 2018).