Find this article at:
go.ncsu.edu/readext?726069
— Written By Rachel Vann

Soybean pod damage can be caused by a variety of pests and environmental factors. Soybeans are most susceptible to yield loss from stress during the R3 (beginning pod) to R6 (full seed) growth stages. Over the past two weeks, we have had reports from several regions of the state (Blacklands, Coastal Plain, Northeast) of pods that appear to be molding and are often accompanied by a puncture wound (Photo 1). From what we have seen so far, the damage is typically isolated to <5% of the overall pod load and doesn’t appear likely to have large yield impacts. This damage is presumably prevalent this year due to prolonged wet and humid conditions, which are conducive to disease development.

What is the pathogen causing this damage and can we do anything to control it?

Fusarium rot has been confirmed on several pod samples (Photo 2). While it is not a common soybean pod rot, Fusarium spp. have broad host ranges and can colonize healthy or dead plant tissues. Recent warm, wet conditions favor growth of Fusarium spp. Fusarium is characterized by abundant white fungal mats on the surface of pods and seeds (Photo 1).

Phomopsis pod rot and seed decay caused by Diaporthe spp. may also have similar symptoms, and may be confused with those caused by Fusarium spp. A defining feature of Phomopsis pod rots is pycnidia (small black spots) on the surface of pods and seeds (Photo 3).

There are presently no effective controls for Fusarium or Phomopsis pod rots after pods show symptoms. Cultural practices that limit excess moisture in soybean fields and favor rapid breakdown of crop debris may reduce future incidence of pod rot. Fungicides applied between R3 and R5 may reduce incidence of Phomopsis stem and seed infections thereby protecting seed quality, but may not impact yields. We currently have no data to inform efficacy for fungicides to limit Fusarium pod or seed infections.

Are stink bugs opening up opportunities for pathogen infection?

Many of the infected pods appear to have a puncture wound that could be from stink bugs. Previous research from the Midsouth found that following prolonged conditions of heat and humidity, stink bug damage left soybean seed susceptible to seed decay. Currently, stink bugs are moving out of corn and cotton and into soybeans and this pest is most damaging to soybeans at the R4 (full pod) and R5 (beginning seed) growth stages, which much of the NC soybean crop is currently in. See this North Carolina stink bug scouting and management information factsheet.

We acknowledge this pod damage is occurring in parts of the state, but from what we have seen do not anticipate large yield impacts in affected fields. Therefore, we recommend that soybean growers use our published thresholds for stinkbug management. 76% of the North Carolina soybean crop is in pod development where it is susceptible to stress and therefore growers should be diligent about scouting fields for foliar diseases and insects.

Photo 1. Common pod damage being observed across the state. 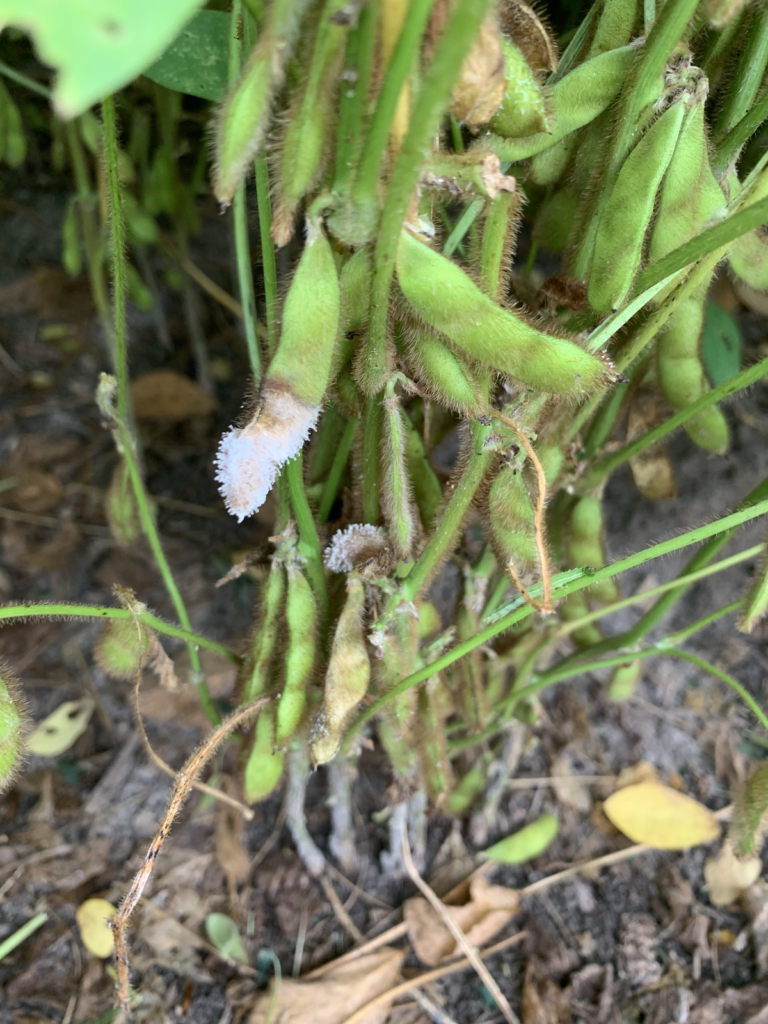 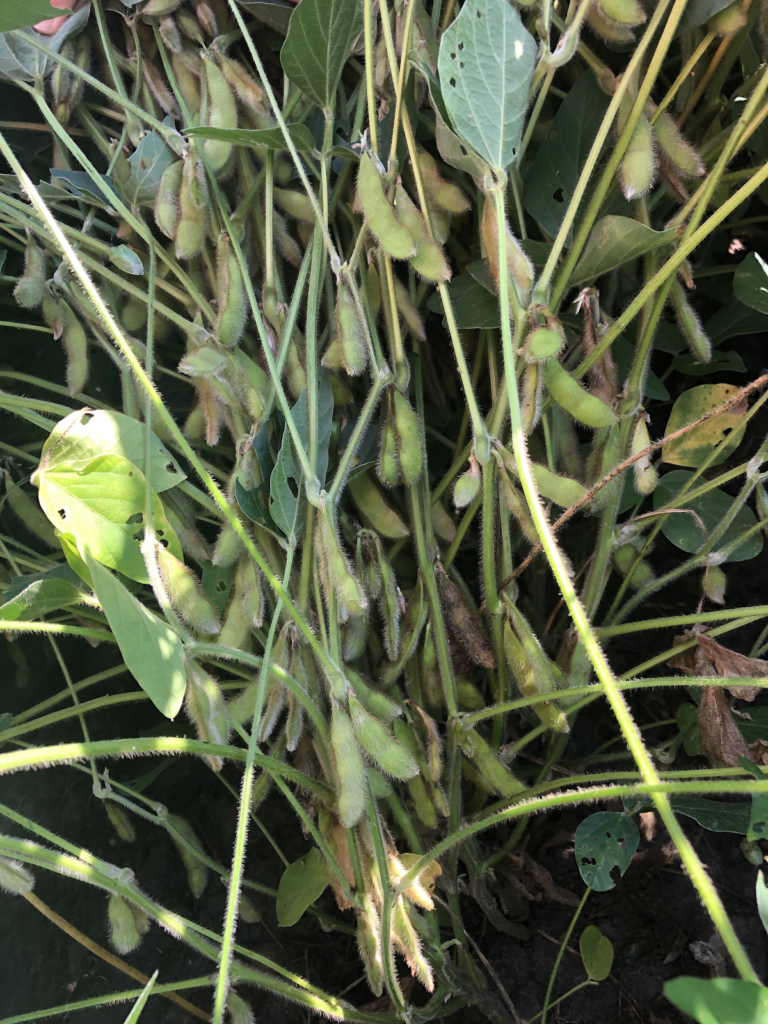 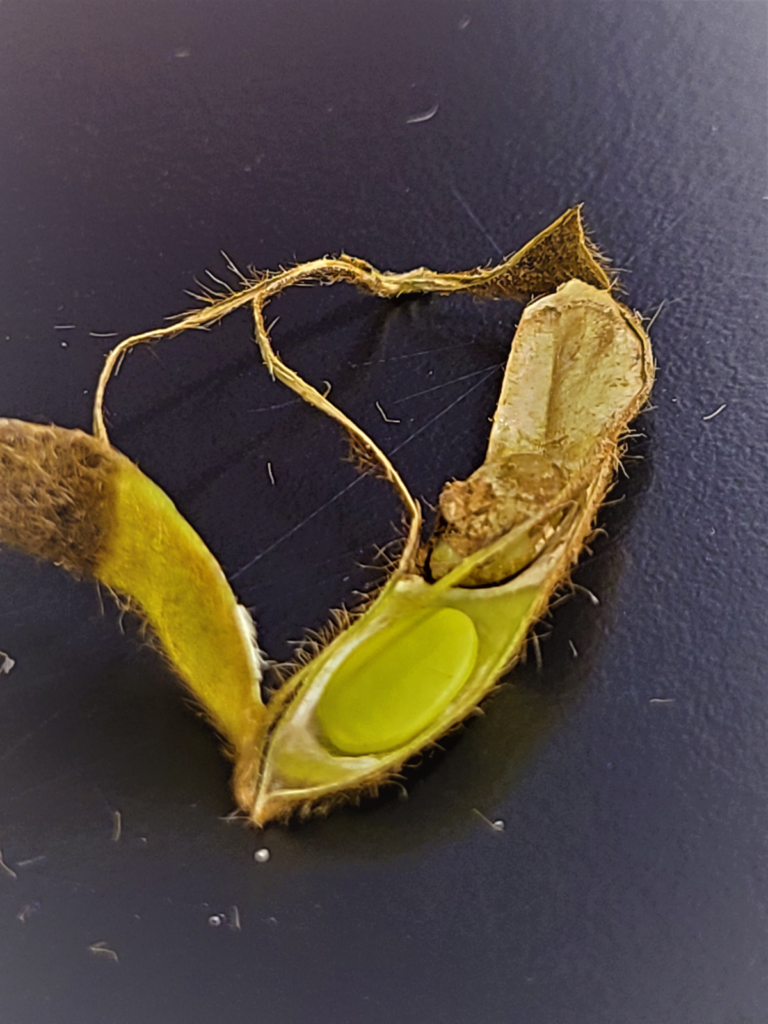