PFP21: Think About Pests When Terminating Cover Crops Prior to Planting Soybeans

Find this article at:
go.ncsu.edu/readext?783663
— Written By Dominic Reisig and last updated by Rachel Vann

Preparing for Plant 21 (PFP21): Think About Pests when Terminating Cover Crops Prior to Planting Soybeans

Have you ever found yourself stuck in a new situation where you were under-prepared? A little over 15 years ago, Dominic trained hard for a marathon and was in peak physical condition. A few weeks after the marathon, he played his first indoor soccer game and suffered a debilitating exercise-induced asthma attack. The lesson he learned was that one type of physical fitness does not necessarily translate across other types.

Cover crop residues can provide shelter for pests to feed and reproduce. When the cover crops are terminated, these pests look for new food sources (seedling beans). For this reason, termination timing is the top risk factor for pest issues in soybeans. To minimize insect pest damage, try to time cover crop termination three to four weeks prior to soybean planting to minimize risk for pest spillover and unanticipated injury to the soybean crop.

In many situations, cover crops are terminated close to planting time, or even during planting, to maximize biomass and subsequently short-term benefits like weed suppression and soil moisture conservation. This is a risky scenario for pest management. Try to scout the cover crop to see any visible pests. Scouting the cover crop should include using a sweep net to dislodge any pest on the foliage and getting down on your hands and knees, brushing away any thatch or residue to inspect the soil. If pests are numerous, an insecticide should be considered. However, even scouting is no guarantee that pests won’t be an issue. Many seedling pests are small and good at hiding; some may even be under the soil surface.

Furthermore, we cannot make a blanket recommendation, since pest issues fluctuate by location, year, and the species of cover crops that are used. Legumes (e.g., Austrian winter pea, clover, vetch) cover crops increase the risk of pest problems in soybeans. Spotted cucumber beetle (southern corn rootworm) and pea leaf weevil can be an issue in soybeans behind legume cover crops. Cereal rye is another popular cover crop species. Threecornered alfalfa hopper can build up in cereal rye and cause severe stand loss in soybeans if termination time is too close to soybean planting. Often times cover crop species are mixed and the soybean crop injury outcomes are unpredictable due to a diverse group of pests.

Using an insecticidal seed treatment or a foliar insecticide (pyrethroid) at planting can minimize some of these risks. We generally do not recommend the use of any insecticides at planting. However, insecticidal seed treatments can provide some protection from pests that can be an issue behind cover crops, like cutworm, pea leaf weevil, spotted cucumber beetle, and threecornered alfalfa hopper. However, in heavy pressure situations, these insects can overcome the seed treatment. Another caution when using insecticidal seed treatments is that they kill beneficial insects, as well as pests, and can release slugs that clip plants and reduce yields (Douglas et al. 2015). Unfortunately, slugs have been an increasing problem in soybeans. We don’t have any remedial management methods to kill slugs and we have witnessed severe damage from them many times.

In conclusion, growers using a cover crop should not be under-prepared for pest infestations. To minimize risks, they should terminate the cover crop three to four weeks prior to planting. If this isn’t possible or desirable, growers should assess their level of risk and consider using an insecticidal seed treatment or a foliar insecticide (pyrethroid) at planting. Finally, if they choose to use an insecticide at planting, this may have unintended negative consequences. Follow-up scouting as the soybeans emerge will be important to assess any unanticipated impacts of pests to the crop. 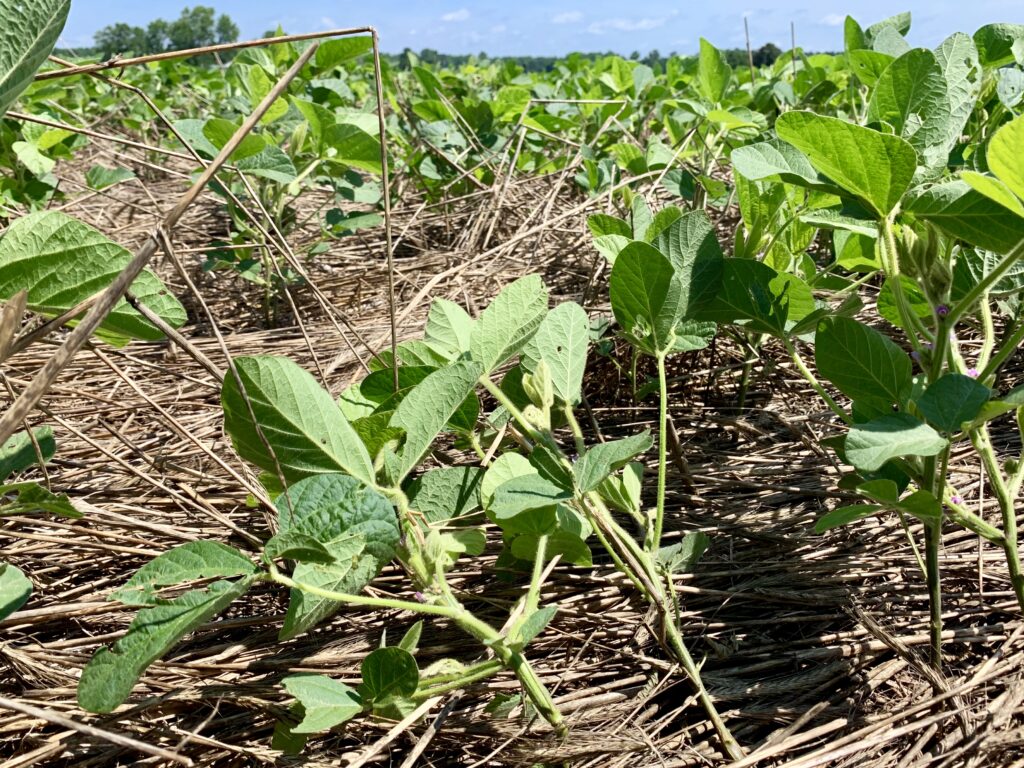