Find this article at:
go.ncsu.edu/readext?643729
— Written By Dominic Reisig

Note this article only applies to insecticides, not fungicides or nematicides.

Hesler et al. (2018) mention nine major pest species across the US targeted by soybean insecticidal seed treatments. All of these pests are sporadic and don’t occur in every field all the time. Of the pests mentioned in this study, bean leaf beetle, leafhoppers, three-cornered alfalfa hopper, thrips, white grubs, and wireworms are the most commonly found in North Carolina. Here are some considerations with each of these pests:

1) Bean leaf beetle- we generally have around three generations a year in North Carolina. They can be severe defoliators late in the season and contribute to the defoliator complex. However, I have yet to see a single field in the state that caused enough early season defoliation to cause yield loss. Their numbers are just too low at this point in the season. Furthermore, while they transmit virus in the Midwest, this is very rare in North Carolina. This is not a pest we need to worry about in early-season soybeans.

2) Leafhoppers, especially potato leafhopper, are frequently found in soybean fields, but do no commonly occur at levels that are a problem. In high numbers, they can “hopper burn”, but this is extremely rare. For the last six years, with the exception of 2017, we have gotten reports of soybean fields with yellow, curling leaves. A lot of people think it’s hopper burn, but it’s not . It’s been noted it in multiple states and mostly in Group VI and VII soybeans. Nobody can figure out what it is, but my gut feeling is it’s an environmental-germplasm interaction. This is not a pest we need to worry about in early-season soybeans.

3) Three-cornered alfalfa hopper IS a pest we need to worry about early-season. They feed on the main stem and girdle it during the seedling stage. This early-season girdling can lead to lodging later in the season. This does not always translate into a yield loss; for example, neighboring plants may compensate or, if the lodging takes place close to harvest, lodged plants may be held up by their neighbors. However, they can occasionally cause yield loss ranging anywhere from mild to severe. Once plants reach 10-12 inches in height, three-cornered alfalfa hoppers begin to feed on branch petioles and are not a problem. While seed treatments will have some efficacy on these pests, because they are so sporadic, a more cost-effective strategy is to walk fields to see if they are present when plants are small. Put a sweep net in fields with sizeable numbers and treat if levels reach one per sweep (one swoosh of the net).

First, as mentioned previously, the use of neonicotinoid insecticidal seed treatments has already driven resistance in one pest (tobacco thrips). If we use them in corn, cotton, and soybeans, resistance will occur sooner rather than later for other pests, as well. Secondly, insecticidal seed treatments kill beneficial insects as well as pests. For example, they can kill predatory ground beetles, releasing slugs that clip plants and reduce yields (Douglas et al. 2015). We don’t have any remedial management methods to kill slugs and I have witnessed severe damage from them many times (see photo). Finally, using insecticidal seed treatments in soybeans unnecessarily exposes the environment to negative impacts, such as degraded surface and groundwater quality and can negatively impact pollinators. 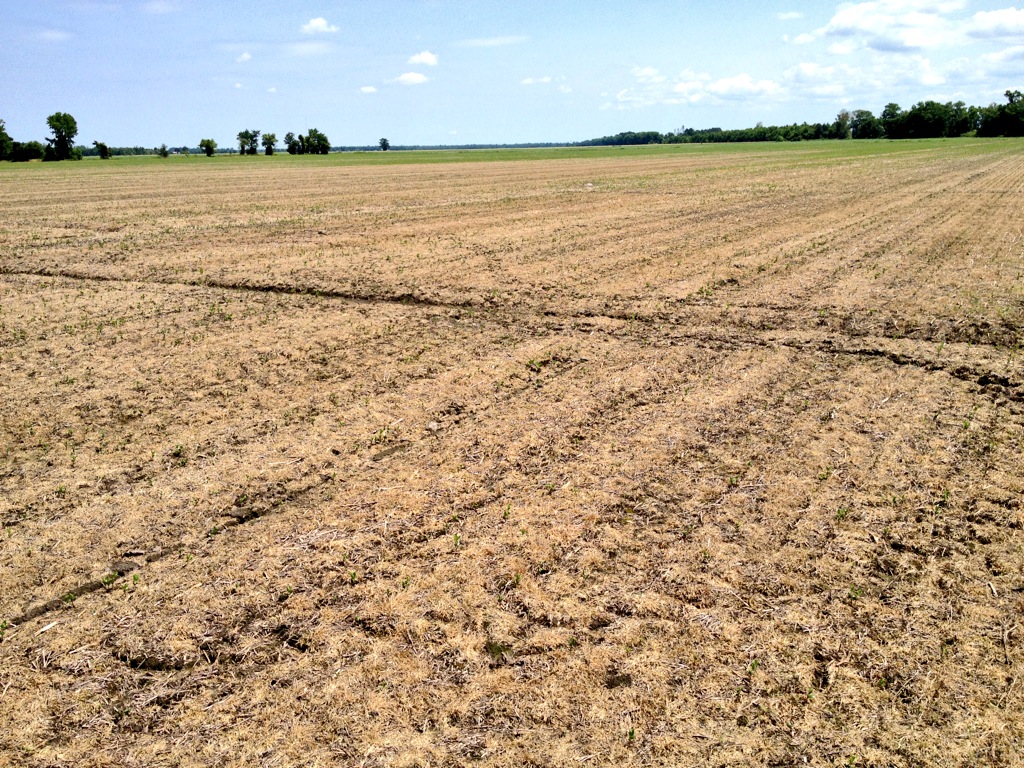 Field decimated by slugs (foreground); good stand in the background.