What Can Cause Soybean Pod Loss and Seed Abortion?

Find this article at:
go.ncsu.edu/readext?733241
— Written By Rachel Vann

We are getting reports of soybean pods that are both aborting and not filling out with seeds. Environment, stink bugs, and disease are all factors that can lead to these issues in soybean reproductive development. The soybean yield components are 1. plants/A, 2. pods/plant, 3. seeds/pod, and 4. seed size. Any stressors, whether environmental, insects, or diseases, during reproductive development can impact yield components 2-4.

The soybean plant will naturally abort some pods, but these are typically smaller pods. The soybean plant will not typically abort pods after R6 (full seed) and at this point and in R5 (beginning seed) the plant will typically respond to stress by limiting seed fill which can lead to flat pods. Any environmental condition that limits critical needs for the plant (photosynthate, water, nutrients) can cause pod abortion from early pod development to early seed development and then inhibited seed fill after that point. Pod abortion and inhibited seed fill will be more likely if multiple weather events have caused stress on the soybean plants (for example, in 2020 excessive moisture early followed by drought conditions followed by an extreme rainfall event after a hurricane). Diseases are another culprit that can cause stress on soybeans plants and impacts to yield components. Despite a below-average year for foliar diseases, we believe that compromised root systems due to excessive moisture and soil-borne diseases are causing plant stress. If diseases are limiting water or nutrient uptake, it can restrict photosynthate movement into the pods and seed. Aerial blight is a disease that has been observed in North Carolina this year that can cause pod loss. Nematodes could also be responsible for adding stress by restricting water and nutrient movement into the plant. Heavy stink bug pressure can also cause pod loss and flat seed; however, other injury characteristics of stink bugs should be present before concluding insect injury alone is the culprit.

We were a little surprised to be getting these reports right now because the weather events of recent across most of the state have not been catastrophic however we believe a lot of the late-season problems being observed in soybeans this year can be attributed to the excessive moisture early in the season leading to compromised root systems that have limited ability to withstand even moderate stress. This coupled with the compromised roots being open to infection from opportunistic diseases has led to additional stress. With both the aborted pods and inhibited seed fill we are getting reports of, it is often an interaction of factors at play rather than one singular factor.

If you are unsure what is causing pod loss or inhibited seed infill in your soybeans, please work with your local Extension agent to submit a sample to the NC State University Plant Disease and Insect Clinic, which is open and operational. 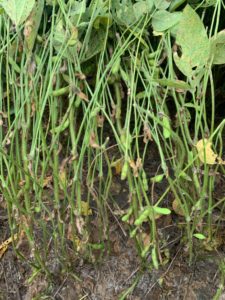