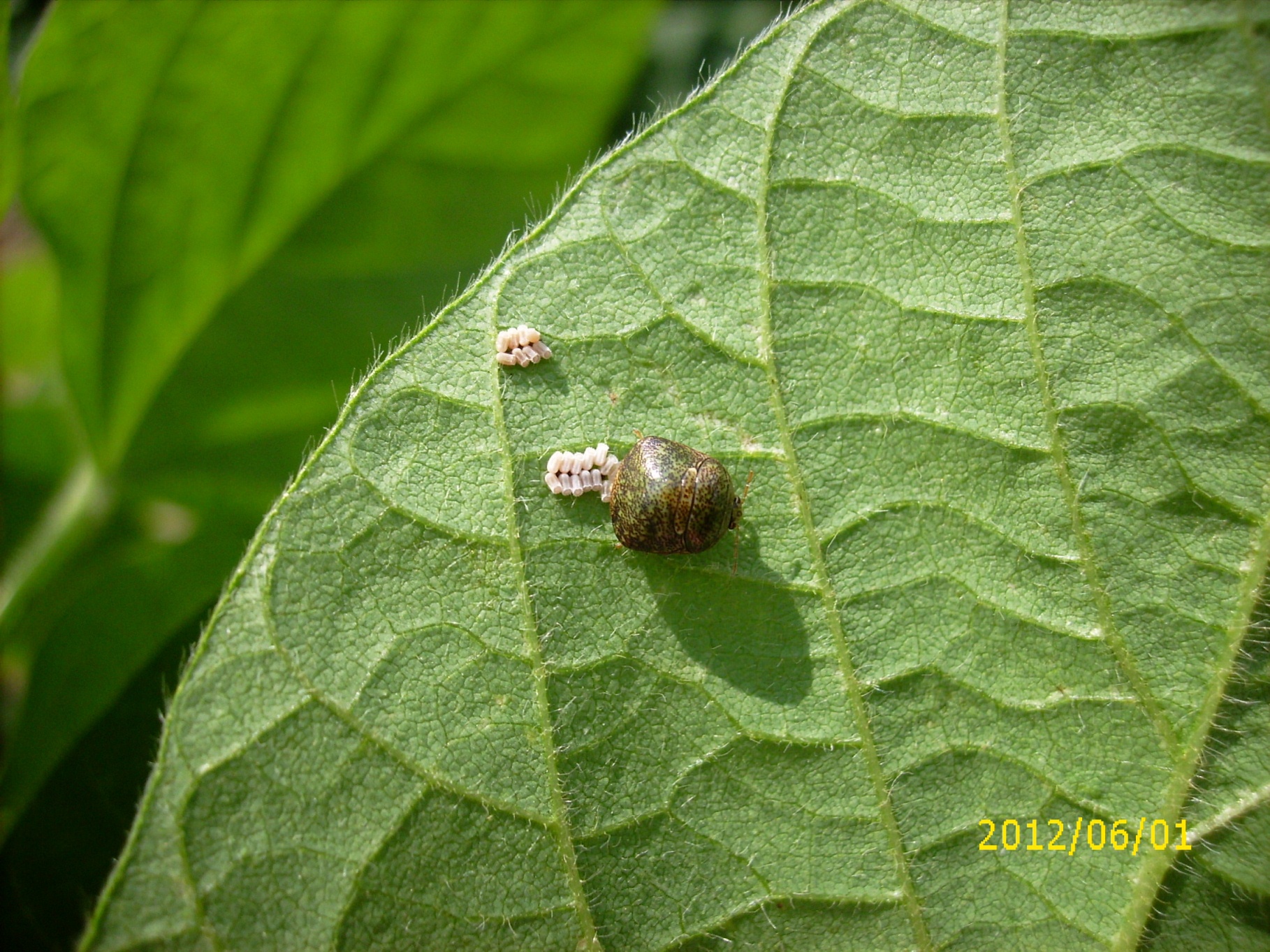 The kudzu bug (bean plataspid, globular stinkbug) was first discovered on kudzu vine in the vicinity of Atlanta, Georgia, during the fall of 2009. From this initial accidental introduction (this pest was NOT intentionally introduced to manage kudzu), kudzu bug has quickly become established as a severe economic pest of soybean in Georgia, North Carolina, and South Carolina. In 2012, this pest was found in most North Carolina counties, as well as in Virginia, Alabama, Tennessee and Florida. Kudzu bug was introduced from Asia, where it is widespread.

Biology:  The kudzu bug overwinters as an adult near kudzu patches and soybean fields in plant debris and behind tree bark, but it will also attempt to overwinter in structures such as houses and other buildings, where it can be a nuisance pest. More information on kudzu bugs near your home can be found in this fact sheet. 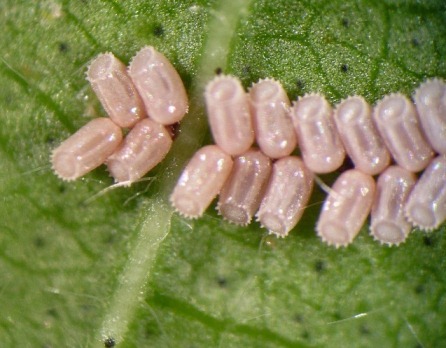 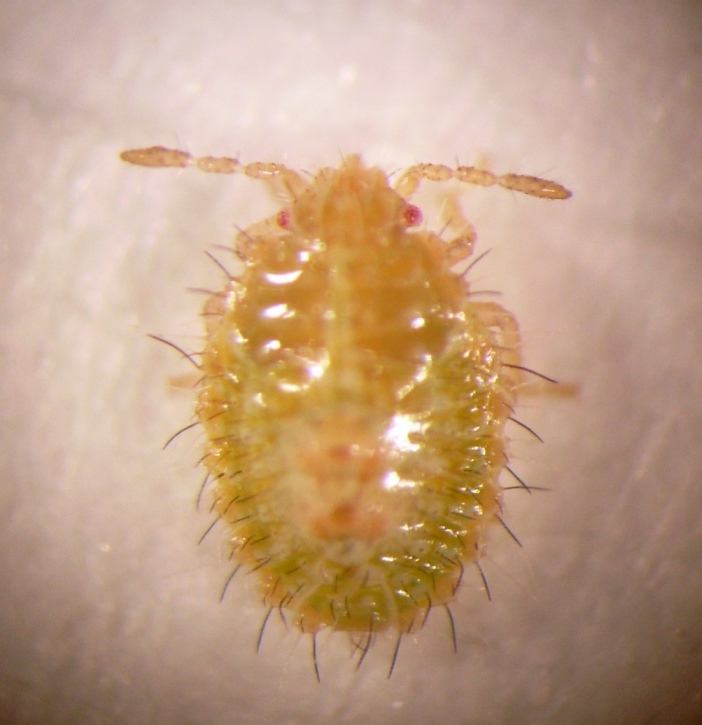 he kudzu bug can complete development from egg to adult in six to eight weeks. After this first generation develops, additional adults are produced that will move into soybeans that may have been planted later. Kudzu bug adults have a preference to infest earlier planted soybeans, soybeans with narrower rows, and soybeans planted using conventional tillage.

Feeding injury and damage:  The insect taps through the veins of plants to reach the phloem, using piercing sucking mouthparts. As a result, injury to plants likely results from nutrient and moisture loss, rather than a direct loss of biomass from removal of plant tissue. Furthermore, sooty mold can develop on the leaves from the sugary excretion of the insect, reducing photosynthetic output.

On soybeans, the kudzu bug adults and nymphs feed on vascular fluids at the stem, petiole, and nodes (last instar nymphs with purplish wing pads), while small nymphs have been observed feeding on leaf veins. Yield losses can be very high if left untreated over time (up to 60%), but consultants and growers should not be alarmed by large numbers over short time periods. 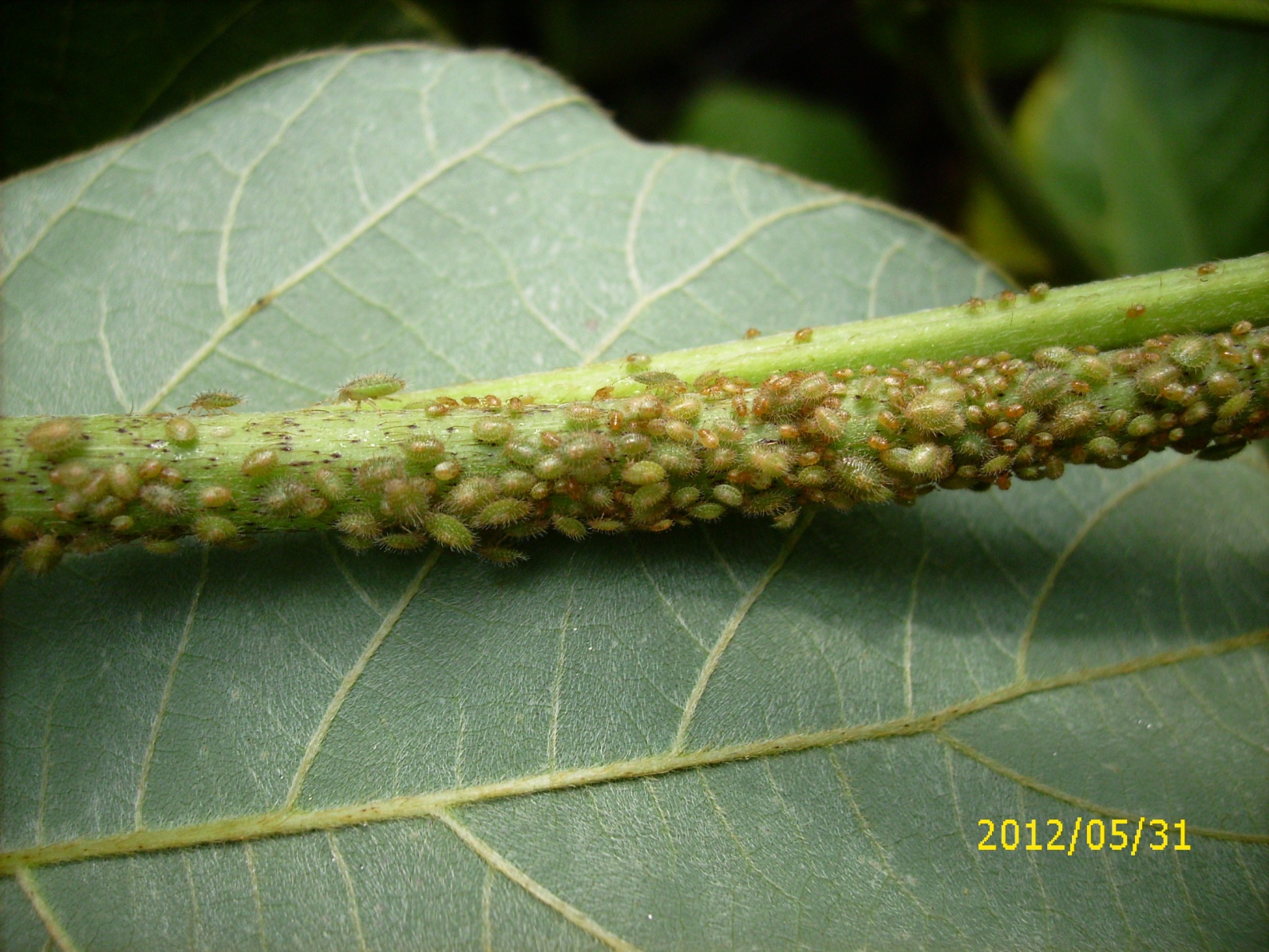 Economic thresholds: Our threshold for spraying is five bugs per plant until mid-July, when we switch to a sweep net-based threshold. Remember that when you spray colonizers during the early season (the adults) you may have to spray again and again. Our best kudzu bug insecticides have little to no residual to control the insect. Once the migration period is over, they can easily be managed with a single spray since they are not difficult to kill.

After mid-July, kudzu bug is more effectively sampled with a sweep net. Several randomly selected samples of 15 sweeps (defined, firm pendulum “swooshes” of the net) per sample should be taken from interior areas of the field. A preliminary threshold of one nymph-stage bug per sweep (i.e.,15 nymphs per 15-sweep sample) is recommended and may help reduce the need for multiple sprays. 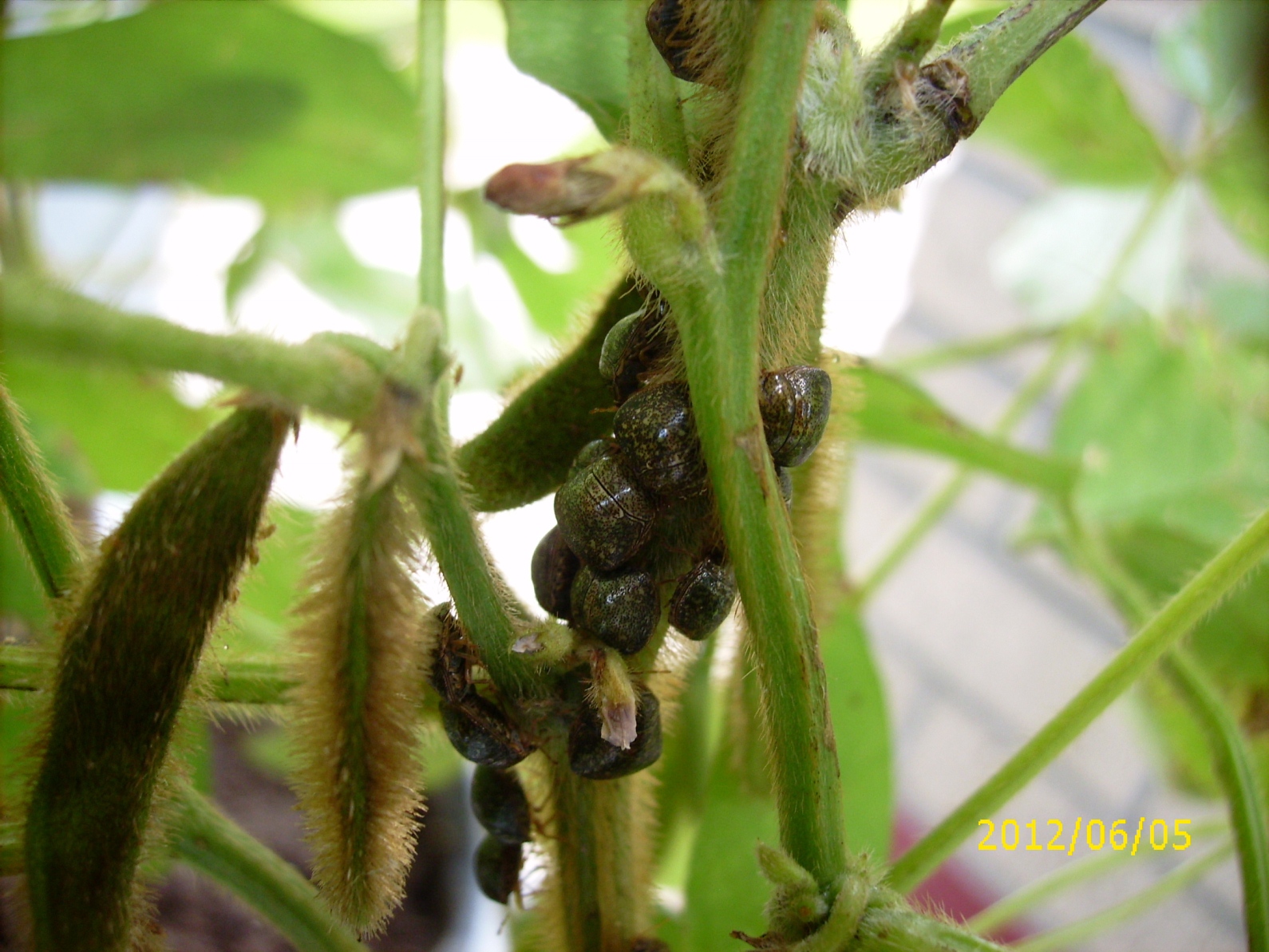 Insecticide Management:  Because the migration of kudzu bug from kudzu to soybean takes place over several weeks, application of an insecticide is not recommended until nymphs are observed on soybean, even though densities of the migrating adults can be quite large. In North Carolina, the migration from overwintering sites begins in March and April. The second yearly migration of the first generation is expected to begin in July and continue mid-August. Field edges are colonized first, and then the bugs move to the interior of the field.

Insecticide evaluations conducted in Georgia indicate that bifenthrin is the most active insecticide against kudzu bug on soybean, although other insecticides are also effective. Because the insecticides effective for kudzu bug are broad-spectrum, beneficial insects will likely be eliminated, putting fields at greater risk for mid- to late-season lepidopteran infestations, such as corn earworm, armyworm species, and soybean looper. Fields should be intensively scouted through R7 for this and all other pests. 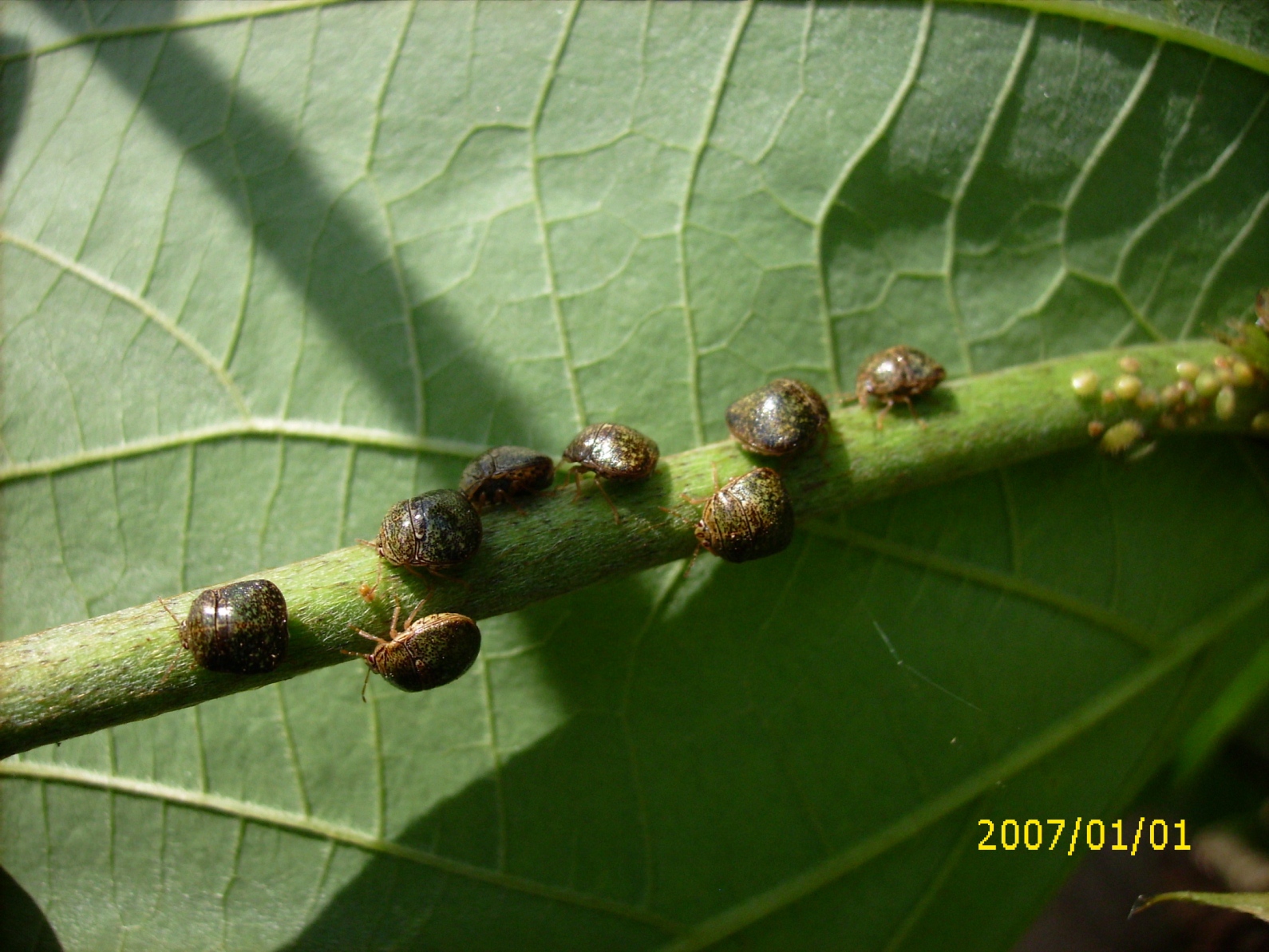