Find this article at:
go.ncsu.edu/readext?785796
— Written By Rachel Vann

Soybean is a plastic crop that can perform well across a wide range of populations, however seed is one of the largest variable input costs for soybean producers and it is important to understand what seeding rates maximize profit without compromising yield. This national Extension publication does an excellent job of describing this in more detail. The interest in using lower soybean seeding rates is driven not only by seed cost but also the shift from drilling soybeans to precision planting coupled with the reliance on herbicide-resistant soybean varieties that enable herbicides as the primary mechanism of weed control.

Historical recommendations for North Carolina: A tremendous amount of seeding rate work was carried out under Dr. Jim Dunphy. This work was largely conducted with determinate varieties and indicated that growers should aim for final stands of 75,000, 90,000, and 100,000 plants/A for May, June, and July planted soybeans, respectively. When making replanting decisions for soybeans, these are our current thresholds to ensure that population is not limiting yield. As with many agronomic situations across the USA, higher seeding rates are needed in North Carolina as planting is delayed to ensure these final populations are achieved. The number of seeds/A planted must be higher than these targeted populations to account for various factors impacting realized stand including germination, weather conditions, soil conditions, and pest pressure. To ensure these final populations are achieved, growers need to correct their seeding rates for the reported germination of their purchased varieties and consider other factors that may adversely impact early season growth. If growers are planting before mid-May, using a fungicidal seed treatment has been found in recent research to protect both stand and yield in North Carolina. 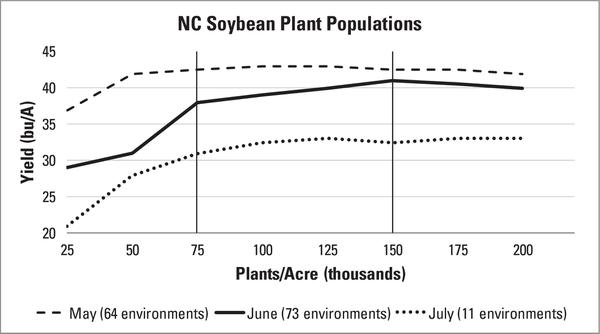 Recent seeding rate research in North Carolina: More recently (2019 and 2020) the NC State Extension Soybean program has been investigating the seeding rates needed to maximize yield across a broad range of planting date and maturity group combinations. This work will continue for several more years and then economic analyses will occur and our seeding rate recommendations will be updated if merited. These preliminary results indicate that across most planting dates, yield plateaued around moderate seeding rates (125,000 seeds/A) and yield tended to be more sensitive to higher seeding rates as planting date was delayed (Figure 2). Unlike some previous research in other USA regions, soybean yield was less sensitive to seeding rate in the early planting situations employed across both yield environments (Figure 2). In our research, the response of soybean yield to seeding rate tended to be consistent across yield environments (Figure 2), however recent research from other parts of the USA has indicated that often higher seeding rates are needed in low-yield versus higher-yield environments. Maturity group did not interact with seeding rate to impact soybean yield, meaning there was a similar response of soybean yield to seeding rate across maturity groups. Other recent research conducted by County Extension agents across the state documented yield penalties of soybean seeding rates below 100,000 seeds/A when planted in May for MG III and IV varieties. It is worth noting that at each seeding rate, we typically saw a higher percent of planted seeds translate into plants with the later than the earlier maturing varieties, which is likely attributed to the adaptability of later maturing varieties for production in our environment.

Figure 2. Impact of seeding rate on soybean yield in high and low yield environments across planting dates combined over MG2-7. Results from research conducted across North Carolina in 2019 and 2020.

Seeding Rate Impact in the North Carolina Soybean Yield Contest: We have recently conducted an analysis of 877 North Carolina Soybean Yield Contest Entries to identify the production practices that were the strongest predictors of high soybean yield in North Carolina from 2002-2019. Planting earlier maturing varieties (MG≤4), planting before mid-May, and the use of a foliar fungicide were the strongest predictors of yield, but we also investigated the impact of seeding rate on soybean yield in this analysis. There was a slight downward trend in yield associated with the use of higher seeding rates (Figure 3), indicating that in high yield environments there were yield advantages to using lower seeding rates. In the statewide analysis of all 877 yield contest entries from 2002-2019, when planting later than May 12 and using an MG≤4 variety, using a seeding rate <130,000 seeds/A resulted in a 7 bu/A yield advantage over using higher seeding rates. 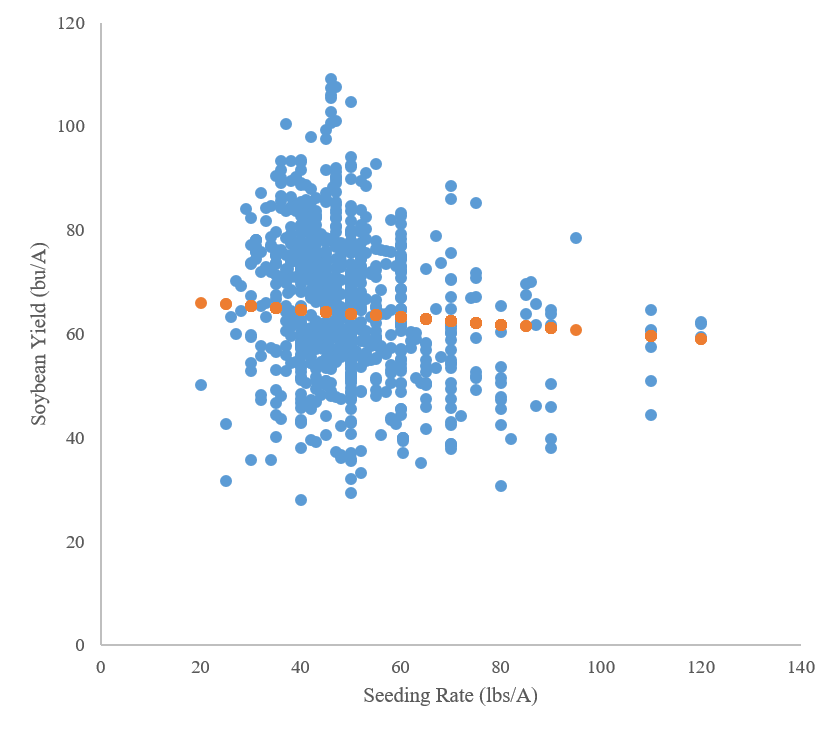 Figure 3. The impact of soybean seeding rate on soybean yield in 877 entries into the North Carolina Soybean Yield Contest from 2002-2019.