Find this article at:
go.ncsu.edu/readext?633559
— Written By Rachel Vann

We are getting widespread reports of green stem in Eastern North Carolina this Fall (2019). We are most frequently getting reports of the issue from maturity groups mid-IV to mid-V, although we know green stem can impact a wider range of maturity groups. Do we have all the answers about this phenomenon? No. The causes are largely unknown but attributed to various stressors during pod and seed development. Knowing that this has been a frequently discussed issue over the past few years, we wanted to discuss some information on green stem.

What is green stem? Green stem is a term for a soybean plant with non-normal senescence resulting in the stem remaining green (and sometimes retaining leaves) when generally other parts of the plant have senesced (most leaves have dropped, pods and seed are mature). See photo below provided by Lenoir County Extension Agent Steve Killette in 2019. 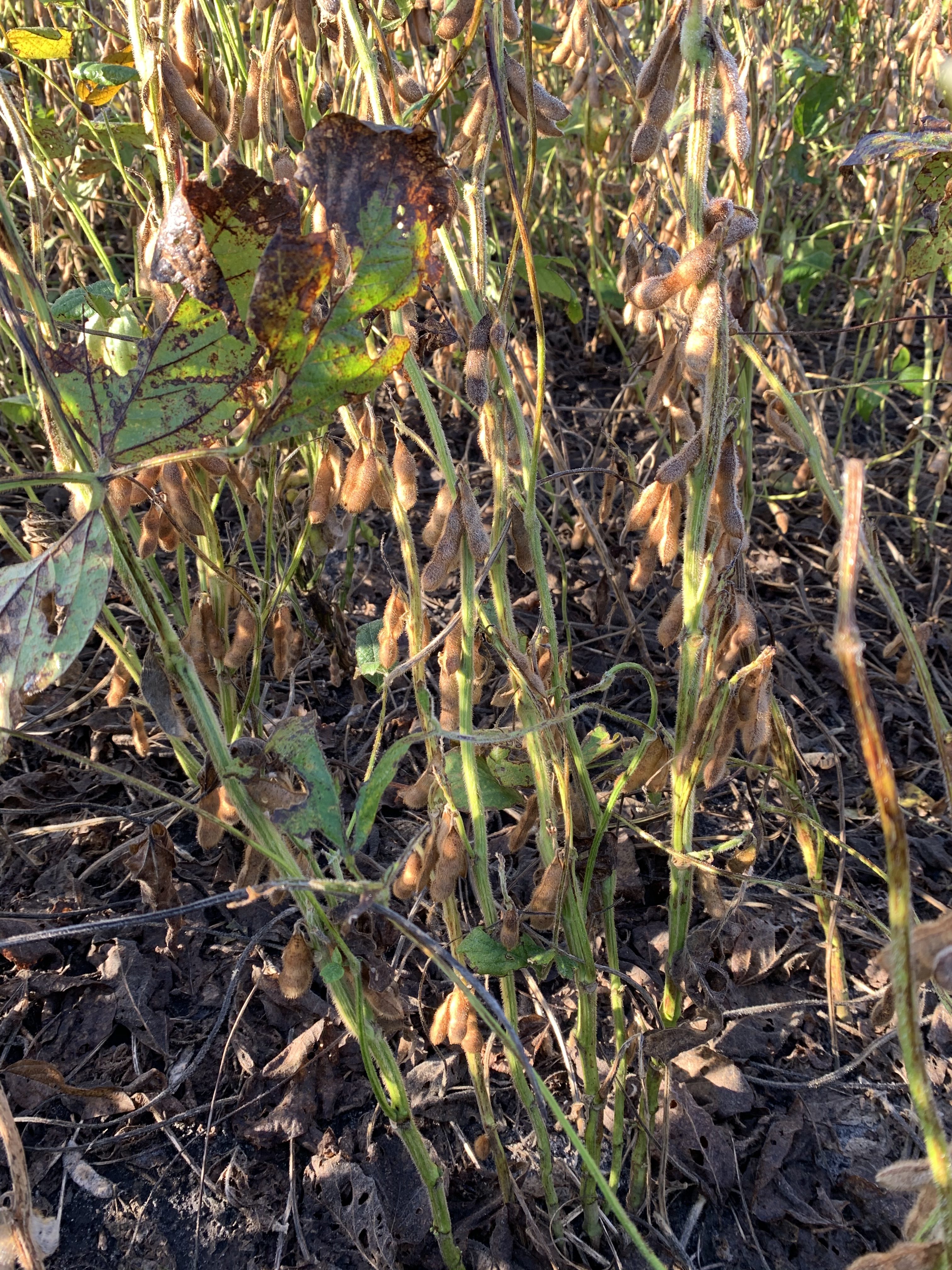 What causes green stem?  There is no clear cause of green stem. The problem can vary from year-to-year and variety-to-variety. It is not uncommon for us to get a report on green stem that has showed up in one variety planted on the same day or a couple weeks earlier/later than the same variety down the road that does not have green stem.

The following factors have been previously implicated for causing green stem: stink bugs (and other insects), viruses and other diseases; however, previous USDA research shows that green stem can be present without any of these biotic factors present (Mueller, 2013). Nutrient deficiencies and ultra high or low soybean populations have also been reported to potentially contribute to the issue.

A research-proven cause of green stem is a result of a soybean plant that has the genetic capacity to produce a greater pod load than has been realized; therefore, the carbohydrates remain in the stem as there is no available sink. Weather factors, such as drought or excess moisture, can lead to these limitations in pod load. With the variability in our weather patterns across North Carolina during the past few growing seasons, this seems a likely cause of the issue in our environment. The late summer 2019 four-five week drought across many parts of North Carolina surely led to stress during pod and seed development for our MG V and VI varieties, as well as other maturities depending on planting date. Finally, it is worth mentioning that high fall temperatures may be leading to faster grain drydown than stem drydown, contributing to green stem issues

It would be natural to think that waiting until the stems are completely brown following a hard freeze would be in the best interest of an easy harvest; however, waiting until the green stems are mature can lead to seed quality declines and potential shattering issues. Green stem does not always reduce soybean yield (Harbach et al., 2016), but it often does require slowing down the combine which is the largest reported production challenge associated with this issue.

Could it be insects?

Some insects can also be agents of green stem, since they can cause stress during the season. Probably our most common pest associated with green stem is stink bugs. Expect to have damage still present that’s associated with them (flat pods, aborted seed, or puncture marks in developed seed). Also expect field patterns to be spotty, rather than distributed throughout the field. Importantly, you may see stink bugs now that arrived after the stress that caused the green stem. Keep in mind that green stem results from stress during the season, rather than late in the game. Other insects can cause green stem too, including heavy populations of kudzu bug or corn earworm. Again, you should expect to find insect damage present if they caused the problem.

What about fungicide use?

Fungicides have been implicated in a number of physiological effects on plants (e.g. general greening and increased yield). Green stem has also been attributed to strobilurin use in several studies; however, this is inconsistent across studies and appears to have a variety-specific interaction in others. The recent green stem-related issues in North Carolina do not appear to be related to fungicide use. Symptoms have been widespread across the state and there is a great diversity of fungicide practices across affected fields, which suggests that issues are related to an environmental or genetic factor.

Can I desiccate my soybeans to get rid of green stem?

Previous reports show inconsistent success desiccating soybeans to get rid of green stem. After talking to colleagues in the Mid-South, they usually do not see a benefit of a harvest aid for drying down the stem itself but if they need to knock some leaves off a harvest desiccant can be helpful.

Can I choose varieties that are less susceptible to green stem?

There are differences in varietal sensitivity to green stem; this has been reported in previous literature and can be seen periodically in our NC State Official Variety Tests. For this reason, selecting soybean varieties with reduced sensitivity to green stem has been suggested. However, due to the nature of this phenomenon, it is difficult to capture ratings on green stem for individual varieties. Green stem can likely occur with any variety if the right environmental stressors are present during pod and seed development.

If green stem is caused by some stress during pod and seed development this could occur in any maturity group. Add the influence of planting date on physiological development of soybean maturities, and it can be really difficult to predict when green stem might be an issue. While green stem can be observed across a range of maturity groups, we have more prevalently observed this issue in maturity groups IV-V this growing season. The photo below is from an agronomic trial where we have a MGV, MGVI, and MGVII variety planted in Union Co on 3/29/2019. The MGV variety is on the left, MGVI in the middle, and MGVII on the right. You can see the green stem issue is much more apparent in the MGV variety than the later maturing varieties. 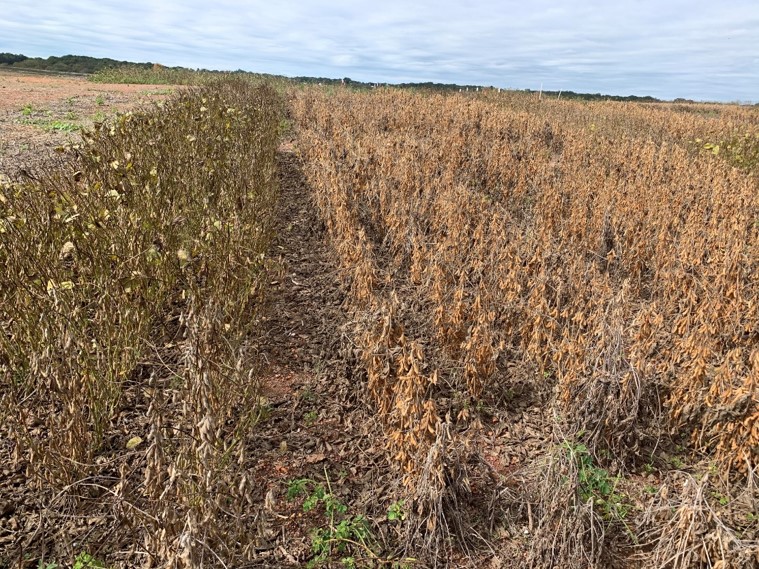 In conclusion, a variety of factors could lead to green stem. Before jumping to a conclusion on the cause of green stem, assess the field for distribution of green stem. If this issue is widely homogenized across the field, weather factors, genetics, or fungicide use could be at play rather than insect or disease pressure.

Some excellent resources on green stem are listed below that were used in the preparation of this blog post:

Mueller. 2013. Iowa State University. Be on the Lookout for Green Stem Syndrome in Soybeans.