Find this article at:
go.ncsu.edu/readext?552852
— Written By Rachel Vann

Hurricane Florence has caused catastrophic damage across parts of North Carolina primarily from flooding but also from wind damage. The impacts of this damage on the soybean crop will vary widely across the state depending on a variety of factors discussed below. We have a wide range in soybean maturity across the state. Some early maturity group soybeans were harvested prior to Hurricane Florence, some are ready for harvest as soon as fields are accessible, and some later maturing varieties are just moving into seed development. Dr. Dunphy has stated that soybeans can withstand some time under flooded conditions, but 3-4 days of flooded conditions will likely cause irreversible damage and subsequent yield declines. More information from Dr. Dunphy on flooded soybeans following Hurricane Matthew can be found in the videos linked here: Concerns with Flooded Soybeans

This update was prepared by Rachel Vann, Dominic Reisig, and Lindsey Thiessen

Here are some points to consider for hurricane-affected soybean fields: 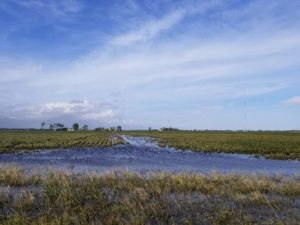