Right now we are witnessing typical end of season insect patterns. Multigenerational bean leaf beetle populations densities are at their highest now and soybeans, with developing seed, are stink bug magnets. At $10 beans, many folks are wondering if beans are worth treating. Our “official” threshold for bean leaf beetle is based on defoliation and is 15% in the reproductive stages (all thresholds here). Our “official” threshold for stink bugs is somewhere around 1 per row foot, or 5 in 15 sweeps. For both pests, we don’t recommend treating once you reach R7 (one yellowing pod anywhere in the plant). Seed producers might want to be a little bit more proactive and treat stink bugs past R7.

I think it’s worth taking the price of beans into consideration, the yield potential of the beans and possible increase (or lack thereof) you might get from a spray, the price of the insecticide, and potential loss from drive-down over the beans. My gut feeling is that beans at R6 this year are probably not worth treating for either pest unless they are very far from R7. The time required to go from R6 to R7 can be several weeks. 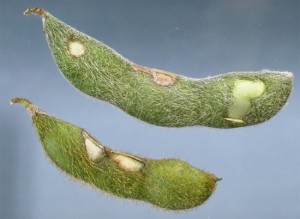 It’s also good to keep in mind the pod scarring behavior of bean leaf beetle. In 2012, I created a threshold based on some old Midwest information. This was a very rough guide and was for $16 soybeans. I think that we can probably bump this threshold up a bit. I would think about treating, as a rule of thumb, if there were 30 bean leaf beetles per 15 sweeps with at least 5% injured/clipped pods in R5-R6 soybeans. Keep in mind this is a threshold for this year only that is mostly opinion and is not well supported by research. So use your best judgment.

What should you spray for bean leaf beetle and stink bugs?  Pyrethroids and organophosphates generally provide good control for bean leaf beetle, but you should rotate chemistry. Bean leaf beetles can quickly build tolerance to one chemical type. So it’s a good idea to switch it up if you’ve been relying on a single class of chemistry for a while.

Pyrethroids are my recommended product for brown marmorated, green, and southern greens stink bugs. You’ll need to rely on Orthene for brown stink bugs. An 8 oz rate should be used as a minimum if browns are present at anything over 2 per 15 sweeps. Increase the rate when more browns are found in the field.