Soybean Leaf Yellowing and Curling Widespread; Cause Is Yet Unknown

Find this article at:
go.ncsu.edu/readext?312501
— Written By Dominic Reisig 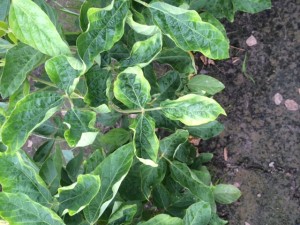 Reports have been pouring in on a mysterious symptom seen across fields in North Carolina. Oddly, these symptoms are widespread across the southeast (including North Carolina, South Carolina, and Georgia), are only present in certain varieties, affect nearly every plant in the field, and are field-specific (one field will be completely affected, while a neighboring field of a different variety will be spared). Experts are having a hard time landing on a good explanation for the cause of these symptoms. Some theories have been insects (primarily potato leafhopper), disease, herbicide, environmental conditions, or an uncommon nutrient deficiency. While we can’t completely rule out insects as a cause, the purpose of this article is to provide some logic for why they might not be the cause. A future blog(s) will be written if the  information weights toward a single cause. 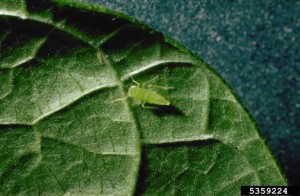 Potato leafhopper can cause similar symptoms to what is being seen (this Illinois article provides some good photos of the injury). Potato leafhopper is a actually a complex of species. Telling the species apart is difficult and not necessary, since it is not thought that different species affect soybean differently. They are present in every soybean field and generally are not considered pests. Since at least 1935, it has been known that glaborous (smooth) varieties are less resistant than pubescent (hairy) varieties. Most folks with potato leafhopper experience have seen injury in variety trials, with some varieties more injured than others. Reports this year from the field are consistent with this. Some commerically-planted varieties harbor more potato leafhopper than others. To my knowledge, the pubescence characteristics of the problem varieties this year have not been part of the discussion or are not known.

There are several characteristics of the problem fields that are not consistent with potato leafhopper injury: 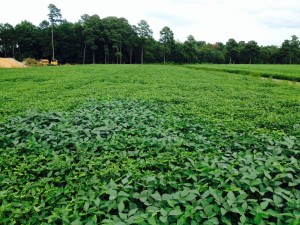 Injury is consistent across the field, except in the soybeans seen in the foreground. This pattern of injury is not consistent with insect behavior.

1. The injury occurs on nearly every plant in the field. The only other pest that we are familiar with this type of behavior is thrips. Most insects injure plants with varying degrees of severity. This can be seen in the last photo of the Illinois article.

3. Consultants that I have spoken to in the state have noticed the injury, but have not recorded potato leafhopper in abnormal densities. The economic injury level (a bit higher than where we set our threshold) was worked out in the 1970’s and is one, nine, and 18 leafhoppers/plant for soybean stages V1, R4, and R7, respectively. Assuming a soybean field has five plants per row-foot, this would mean that 270 potato leafhoppers would be found on a typical drop cloth sample, or hundreds would be found in a typical 15 sweep sample. Densities have not been recorded anywhere at these levels to my knowledge.

4. Often, plant maladies discovered after the fact cannot be conclusively attributed to any one single factor. A good example is banana ear in corn. Every year I field questions about this as corn is being harvested or is near harvest. At this point in the year, it is unclear whether banana ear was caused by environmental conditions (such as drought) or by stink bugs. If stink bugs weren’t noticed feeding during the susceptible stages of corn, it is nearly impossible to pin the injury on insects. Similarly, causes other than insects could cause the symptoms being observed (yellow leaves and cupping), such as herbicide injury, environmental impacts on the plant, nutrient deficiencies, etc.