Find this article at:
go.ncsu.edu/readext?311153
— Written By Dominic Reisig 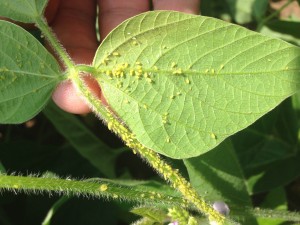 Last year’s cool and cloudy summer must have created good conditions for soybean aphid, since it could be found throughout the state. This year, a NCSU Entomology graduate student, Brad Fritz, noticed soybean aphid in the Sandhills. Last year, a few fields were at treatable levels (250 aphids per plant) a bit west in the Piedmont. Pure speculation here, but maybe buckhorn is more prevalent here than other areas. Certainly the climate must have something to do with their presence and, perhaps, spread from areas where they are more common. At the most, soybean aphid has seemed to remain more of a curiosity in the state since fields at or near threshold are rare.