Find this article at:
go.ncsu.edu/readext?306520
— Written By Dominic Reisig

I have received lots of reports of worms in early season soybeans. Sampling numerous fields this week, I can vouch for the fact that corn earworm or tobacco budworm is present, but in most cases it is not around at densities that are concerning. That being said, there are spots where worms are present early in good numbers, which is not what we normally see.

If you have worms present in your beans, the first step is identification. This guide is a good resource for you to narrow down what worm species you might be seeing. Distinguishing between corn earworm and tobacco budworm is very difficult and requires special equipment and training. You can send samples to the NCSU Plant Disease and Insect Clinic for identification. Some county agents have the expertise to do this, as well.

The second step is to assess the injury that the worms are causing. Our threshold is triggered at 30% defoliation throughout the entire canopy before beans are blooming. The picture below can serve as a guide for estimating defoliation. Our threshold of 30% is very conservative. Recent research from the Midsouth confirms that we can tolerate defoliation at levels much higher than 30% without a yield loss. You can rest easy with a spray at 30%, knowing that beans can compensate for the lost foliage later in the season. 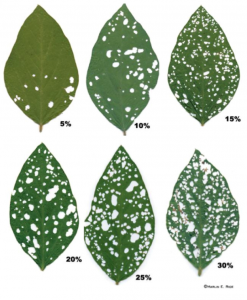 One other thing to consider is larval size. If you have very large larvae, they can eat more, but they may cycle out soon. It might be better to let this happen, rather than spray, if you are below threshold. If there are still a lot of small or mid-sized larvae, you might need to spray if you are at, or near threshold. We want to avoid spraying unless we really need to at this point in the season to preserve beneficials. Fields that are sprayed at this point in the season run the risk of getting on the pesticide treadmill. This is where we spray one pest (for example worms), flare another (more worms or spider mites), spray that pest, flare another, etc.

Once you reach threshold and you know what species you have, product selection is key. If corn earworm is your pest, a pyrethroid should work fine early in the season. Although corn earworm is becoming more and more tolerant of pyrethroids every year, they tend to be more susceptible early season. Later in the season we probably select for survivors that are more tolerant of pyrethroids. At this point we will need to switch to more worm-specific materials. If you have tobacco budworm, you will need to spray one of the worm-specific materials. Good choices are Belt, Blackhawk/Tracer, Prevathon, or Steward.