Find this article at:
go.ncsu.edu/readext?303019
— Written By Dominic Reisig

As I predicted in a blog last month, I received reports our first kudzu bug migrants into full-season soybeans this week. We can expect more migration, as nymphs continue development on kudzu and migrate to soybeans as an adults. This migration might peak in a few weeks, so any sprays applied now will likely result in reapplications. Kudzu bug seems to be returning to what we saw in 2010 and 2011, where we saw few early season situations. 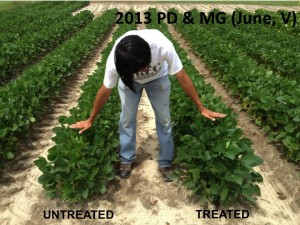 Early-season kudzu bug infestations can reduce height of soybeans. In good conditions, they will compensate for yield.

We have a preliminary threshold for early-season infestations because we have never documented a yield loss from these type of infestations. The soybeans plants can compensate later in the season. However, the insects can reduce plant height. Furthermore, our early-season experiences were in years with generally plentiful rainfall. So there may be some situations where plants can’t compensate in droughty conditions. To avoid any impact on plant height or yield loss, the preliminary NC early-season threshold is 5 bugs per seedling. Fields infested at these levels will likely be a rare situation.

If you are visually sampling seedling soybeans, peel back the plants to reveal the stems. You will see many plants without bugs and some that are loaded (we think the insect has an aggregation pheromone, making it attractive to other kudzu bugs). Base treatments decisions on a per-plant average. My best guess is that neighboring plants will compensate for any stunting that might occur on heavily infested plants. Plants should be sampled at least 50 feet from the edge of the field.

The established threshold of one nymph per sweep (one swoosh of the net) should be used for plants once we reach mid-July or so. Plants should be sampled at least 50 feet from the edge of the field. The reason for this is that the adults have an extended migration period (6-8 weeks) and colonize field edges first. If you sample the edges, chances are you will make a spray decision too soon before the migration is over.

Let me also tell you a cautionary tale. An NC grower noticed kudzu bugs on the edge of his April-planted beans in May 2012. They had not yet infested the interior portions of the field. He opted to spray. He then had to spray again in June, as the adults remigrated into the field. Additionally, sprays don’t kill eggs, so these hatched into nymphs. The grower then had to spray a 3rd time in June, as spider mites were flared in the field from the lack of beneficial insects. We want to avoid these costly situations while still preserving our yield.